“Life is either a daring adventure –
or nothing.”
– Hellen Keller

It has been a wonderful, rich and challenging 5 1/2 years in India. I have been treading on her soil, and breathing her air. Her temples, trees, cows, camels, elephants, and of course, her people have become a part of the fabric of my daily life.

A land has its own thought-waves pulsating in every particle, and in India’s case, century after century of seekers contemplating, pursuing, and struggling to reach the Highest has left an indelible pattern in the land and its people. No amount of cell phone traffic, or IT development seems to be able to erase this powerful tendency to view life as essentially a spiritual phenomenon. Thank God! 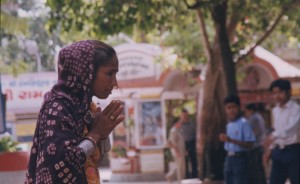 It has been my experience that living in India is pure struggle until I learned the right balance between laughing at the way things are, and standing up for what I believe. Knowing which attitude to adopt when was the key! It took me many sessions of trial and error, until this India-specific instinct was honed.

Until I reached that state, an endless array of details bothered me – “Why is that guy driving on the wrong side of the street?” “Why is the electricity always cut just as I’m about to send a long email I just finished writing?” “The train is how many hours late?” “Why do I have to stand in this God-awful line to pay my electricity bills? Oh my God, that guy just elbowed his way in front of me!” and on and on

But one day, as I was riding my “giri-walli cycle” (translation: a bicycle with multiple gears – a rarity in India, apparently) around “The Lakhota Lake” (actually a pond, to be technical) in the small Gujarati town where I live, I had an epiphany. 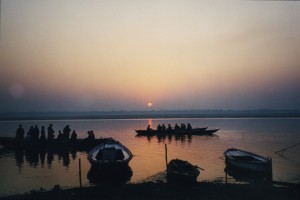 Well, maybe that’s too dramatic a word. But the sunset was on the horizon, and the orange rays danced on the murky pond-waves, and bathed everything – the medieval fort, the cotton-candy sellers, the old turbaned men who just hang out there smoking their beedis, the beggar children, the donkeys and cows…and the wind was mild with dust particles sparkling in the sun. Near by, from the Hanuman Temple (famous for its 24 hour chanting), the ceaseless drums and cymbals accompanied the “Shri Ram, Jay Ram, Jay Jay Ram” chant.

It was simply a flash of understanding that came with the orange sun, the dusty wind, the chanting voices – that I, nobody else, was responsible for my happiness, and that a state of being was available to me where I can embrace everything – including myself – with love and good humor. Everything had its own unique logic, and I was part of the equation of Totality. 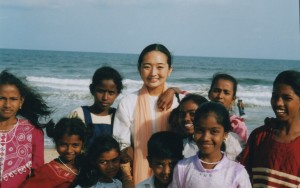 With Kids in Chennai Beach

India was teaching me to walk the razor’s edge between being open and surrendering to what is, and claiming my essential identity. The mystery of when to surrender and when to be firm and assertive became much clearer as I continued to ask myself, “ What is conducive to my growth?” and “What is in the highest good for all concerned?”

From that day on, things seemed much easier. Traffic continued to be crazy as ever, the electricity cuts were still a regular occurrence, trains were still late, but I felt buoyant, and there seemed to be a sparkle of joy in my daily existence.

Of course, these obstacles, experiences, and insights can happen anywhere, not just in India. But I am grateful to India for being such a persistent, in-the-face teacher who wouldn’t let go until I got the lesson!

She is also incredibly soft and compassionate at times, like the Indian mothers who cheerfully treated me as though I were their own daughter; like thesadhus whose deep eyes penetrate your being and ignite an ancient longing to know That.

All Indian mothers that I’ve met are give-aholics, and Mother India is no exception. But be ware! She will test you first to see if you are worthy. Her most precious gifts, I’ve discovered, require a subtle eye to see past the chaos, an open, patient heart, and the courage to be changed by Her. 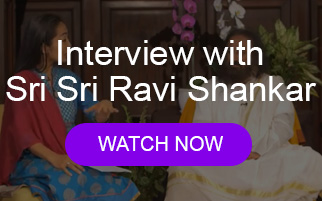 A Beginner's Guide to Understanding Your Ayurvedic Type

Riding the Waves of Change: A Remedy for the 21st Century

What David Bowie Taught Me About Yoga and Life

Revolve to Evolve! Standing Twists to Propel Your Spiritual Evolution 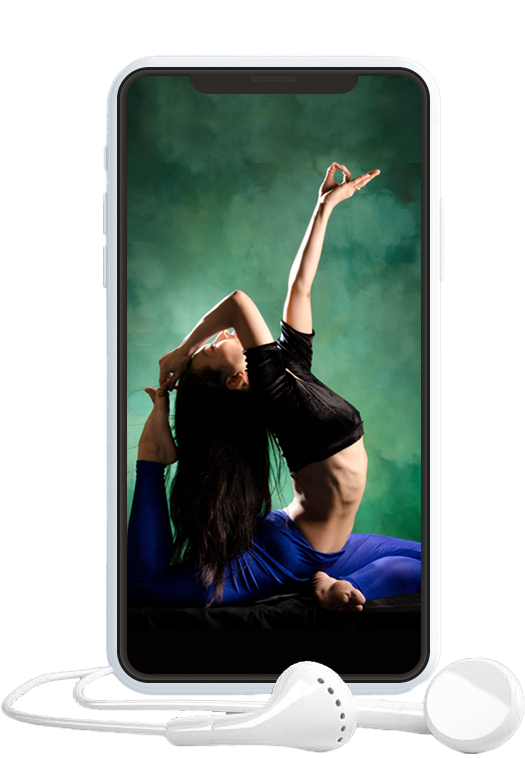